Miloš Šarčev at the Arnold Sports Festival. Interview for the Creative Society project

In September 2021, volunteers of the Creative Society project visited the Arnold Sports Festival, one of the most prestigious sports festivals, which was held in Columbus, Ohio (USA).

Reporters managed to communicate with Miloš Šarčev, a professional bodybuilder and a coach from Serbia, a participant of international sports competitions. Miloš shared his understanding of what can unite people around the world and make it a better place:

"When you said about unification — is spread love. Spread love, you know, treat everybody with respect and support, help if you can. 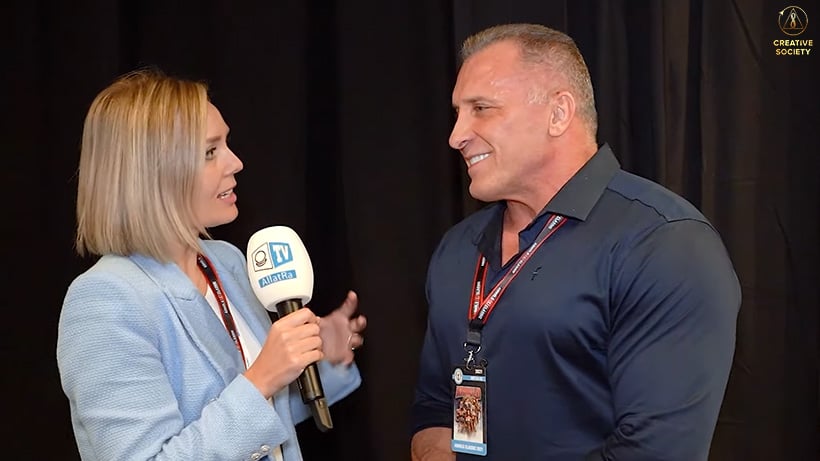 This is how we're going to make a better world in a competitive-driven sport like bodybuilding. As I did this for 20 years, there was a very strong camaraderie. I was going to international grand prix tours all over Europe including Russia, Finland, Spain, Italy, and so on. I was traveling with my competitors and we were helping each other like Nasser or somebody from also Egypt and Serbia, Sonny Schmidt from Australia, you know, there was Ronnie Coleman from here, Kevin Levrone. So as you... talking about unification, yeah, it would be wonderful that, as they say, ‘we are the one’. If we can be the one... if we can have one language, one love for each other that will be the greatest thing on Earth!”

Miloš is also sure that any changes begin with a person himself: "If you just wonder maybe somebody is going to do it but not I. No, no, you have to do it yourself, that's how it goes…  But, you know, being accountable, responsible, doing the right things all the time. And the right thing is spreading love and helping and supporting and educating and, you know, anything in that matter. Basically, you move forward, not backward. This is how it goes."

Volunteers told Miloš about the large-scale international conference Global Crisis. Time for the Truth, which aims to find solutions to environmental and climate problems. And they asked the athlete how important it is for people to know the truth about what is happening to our planet, and to act together.

"Truth is right there in the same category with love. I mean if we gonna lie to ourselves, you know, we are going nowhere. So truth would be a beautiful thing to disclose, as you know all the governments have some secrets that don't want to be released. Truth is also the meaning of life. You live the truth — you have a meaningful life. You live the lie — you don't."

Now, thanks to the truth that became available at the conference, people understand that our task is to change the vector of development to a creative one. This will help us to become a single peaceful civilization and cope with all challenges! As Miloš Šarčev said: "Always two is better than one, four is better than two and so on. So the more people you have that go in the same direction the unity as you talk about would make this whole world united."