Time for Action is Now. The Letter From the Prime Minister of Tonga

On December 4, 2021, the international online conference "Global Crisis. Time for the Truth" the letter from Pohiva Tuionetoa, Prime Minister of the Kingdom of Tonga was presented.

The Kingdom of Tonga is a Pacific state in Polynesia, situated on 170 islands in the eponymous archipelago, with a population of 103,000 people. Tonga is slightly larger than Singapore and 164 times smaller than New York City. The islands support rich marine and oceanic flora and fauna over 750 square miles in the Pacific Ocean. At the same time, Tonga is ranked the 2nd most vulnerable to natural disasters!

Pohiva Tuionetoa was invited to the conference and wanted to address the issue of climate change in person, but due to urgent obligations in government, asked to include a short message from the Kingdom of Tonga to reflect the views of the Pacific region on the issue. 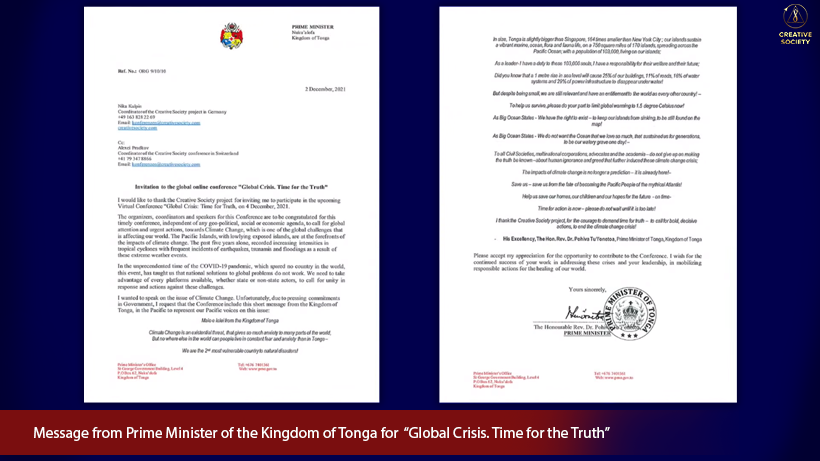 “The organizers, coordinators and speakers for this Conference are to be congratulated for this timely conference, independent of any geo-political, social or economic agenda, to call for global attention and urgent actions, towards Climate Change, which is one of the global challenges that is affecting our world.

The Pacific Islands, with lowlying exposed islands, are at the forefronts of the impacts of climate change. The past five years alone recorded increasing intensities in tropical cyclones with frequent incidents of earthquakes, tsunamis and floodings as a result of these extreme weather events.

In the unprecedented time of the COVID-19 pandemic, which spared no country in the world, this event, has taught us that national solutions to global problems do not work. We need to take advantage of every platform available, whether state or non-state actors, to call for unity in response and actions against these challenges”.

The Prime Minister also noted that climate change is an existential threat that is of great concern in many parts of the world, but nowhere else in the world do people live in such constant fear and anxiety as in Tonga. A 1 meter rise in sea level will cause 25% of buildings, 11% of roads, 16% of water systems and 29% of the nation's energy infrastructure to go under water!

"But despite being small, we are still relevant and have an entitlement to the world as every other country! — notes Pohiva Tuionetoa," To all Civil Societies, multinational corporations,advocates and the academia — do not give up on making the truth be known — about human ignorance and greed that further induced this climate change crisis. The impacts of climate change is no longer a prediction — it is already here! Time for action is now — please do not wait until it is too late!"

Shortly after the conference, on January 15, 2022, the underwater volcano Hunga-Tonga-Hunga-Haapai erupted, the one which is located under water at a distance of 65 km from the capital of Tonga in the Pacific ring of fire. A column of ash, steam and gas rose to a height of 39 kilometers. This eruption was the largest in several decades and caused a tsunami that destroyed almost all houses on small outlying islands of the archipelago. Ocean waves rushed across the Pacific Ocean to the shores of Japan, the USA, Mexico and South America. Cities in Peru were flooded, unfortunately, there were casualties. In New Zealand and Australia, residents fled potentially dangerous places.

The eruption of the underwater volcano Hunga-Tonga-Hunga-Haapai was depicted by the satellite. The published footage shows an "explosion" in the Pacific Ocean. Tongan authorities called the incident "an unprecedented disaster." Two people died as a result of the eruption, several dozen were considered missing. The islands of Hunga-Tonga and Hunga-Haapai were practically destroyed. Volcanic ash severely damaged the water supply, interrupted communication with the chain of islands after the damage to the only underwater cable connecting Tonga with the rest of the world. Air traffic was temporarily suspended and maritime transport routes were disrupted. In some regions, mobile communications, Internet and electricity were not available. More details about this event can be found in the Breaking News.

All these sad events once again show that the strength and power of horrific climate disasters are growing. We need to take immediate action to keep people who live in dangerous areas safe. Indeed, today more than 800 million people live within a 100-kilometer radius from active volcanoes!

Join the process of informing, we need to tell people the truth about the real causes of climate change and that there is a way out! Only in the Creative Society, where the life of every person comes first, will we be able to find solutions to the most urgent problems and create worthy conditions for all people of our planet.