Scientists who are not afraid to tell the truth

In today's world, a career, public opinion and professional fulfillment mean too much for a person. Sometimes not only the amount of salary, but also life itself depends on it. People hardly agree to be a black sheep or an outcast.

But imagine that not only professionalism, skill and experience are exchanged for money, but also conscience and, what is terrible, the truth which the lives of millions of people depend on. This is exactly what is happening nowadays.

At the international conference "Global Crisis. Time for the Truth", which was held in December 2021, humanity learned the truth about the cycle of cataclysms, hidden from people. Every 12 thousand years our planet is exposed to galactic interaction, and now we’re entering an active phase of such a cycle.

Twelve thousand years ago, the Earth already experienced dramatic climatic changes. They were accompanied by catastrophic volcanic eruptions, a shift in the magnetic poles, global warming, an increase in sea level, and ended in severe glaciation. The evidence of past natural disasters that occurred not only 12,000 years ago, but also 24,000 and 36,000 years ago remains on our planet.

The general public is virtually unaware of the impending disaster, as this information does not appear in the media, is silenced and not made public. However, humankind is lucky that among us there are honest scientists who speak the truth loud and clear.

What the IPCC experts, climate scientists, and the media are telling us

What of all this is being told to humanity? Instead of the truth, people are told only one mantra: the anthropogenic (human-related) factor affects climate change, global warming is looming, so it is urgent to reduce carbon dioxide emissions.

However, the direct evidence that CO2 is not the main driver of our planet's warming is the fact that other planets and satellites of the solar system, which apparently have no anthropogenic greenhouse gas emissions, are simultaneously heating up. How could our anthropogenic CO2 and methane reach other planets?

The media imposes the lie about climate change allegedly caused by carbon dioxide emissions into the atmosphere. And people, without having truthful information, believe these lies.

It is clear that scientists had to be the first to openly speak about the causes of climate change. That is why in 1988 the Intergovernmental Panel on Climate Change, the IPCC, was created. This group claimed its goal to assess the risks of climate change caused by human activity. The group began issuing brief reports for politicians and the media. And now it is very possessive of its monopoly in the provision of data, or rather, its hegemony.

In 2009 and 2011, unknown hackers made public the email archives of key researchers in the IPCC report writing system. This correspondence revealed that along with the discussion of scientific issues, topics of bullying opponents and their concepts were discussed. They decided how to discredit, pressure, or fire the editors of scientific journals who dared to publish articles of scientific opponents. They discussed how to hide data that did not fit the trend about the warming. It turns out that the experts used their authority to decide what was science and what was not.

After a public response, they reported that they did not mean what they had written in their correspondence. There were investigations into the activities of the IPCC scientists and in all cases they were acquitted.

This graph released by the IPCC was widely circulated in the media and promoted by politicians. It was included in documentaries, flaunted at protests. So, in the letters from climate scientists, it was mentioned that there was a lot of criticism of the data and statistical methods used to build this graph. However, the authors ignored this information.

There were scientists who wrote papers with remarks to this graph, but their works were not published in highly ranked journals. Articles of scientific opponents of the theory of anthropogenic influence on climate change are still not accepted, and funding for their research is not allocated. If an article is managed to be published, it is followed by harsh criticism from the media.

Scientists who speak the truth openly

Participants of the Creative Society project contacted scientists who agreed to openly speak at the conference “Global Crisis. Time for the Truth” to expose the false theory of climate change. They reported their position on the impact of the anthropogenic factor, the causes of disasters happening on the Earth and their research on climate change.

For example, Dr. Harold Sterling Burnett, Ph.D., senior fellow on environmental policy and the managing editor in Environment & Climate News, stated in his speech at the conference that over time, the atmospheric levels of carbon dioxide have radically fluctuated throughout the Earth's geologic history. They have been in the past as much as 5000 parts per million. They are currently about 420 parts per million. So over long periods of time, they have fluctuated, but in general they have fallen, — the scientist clarified.

The scientist said that the world's governments, through the U.N., formed the U.N. Framework Convention on Climate Change.

The Doctor of Science added that if unreliable or incomplete assumptions are made, the models will be unworkable because their quality is determined solely by the accuracy of what is put into them.

For his part, Gregory Wrightstone, a geologist and expert reviewer for the Intergovernmental Panel on Climate Change, USA, in his presentation at the conference noted that there doesn't seem to be any correlation whatsoever with increasing CO2 and temperature.

"If we look out, one of the things we're being asked to believe is that our modern temperatures are unusual and unprecedented. We've never seen temperatures like this in thousands of years. That's just not the case," the scientist said.

According to him, the warming trend we're in right now started more than three hundred years ago. But again, 250 years of warming took place before we started adding CO2.

"We're asked to believe that those natural forces that have been driving temperatures since the dawn of time suddenly ceased in the 20th century?" Mr. Wrightstone wondered.

Professor of Chemistry, Master in Physical Chemistry and Spectroscopy Ole Henrik Ellestad from Norway, in his speech at the conference spoke about a map showing temperature changes over the last 11,000 years - these are Greenland ice cores.

Mr. Ellestad noted that the IPCC also claims that the sun has no effect on us. It’s a great paradox.

"It’s not clear how they arrived at that. Moreover, today we see that warming is happening not only on our planet but also on other planets. And on the moon too, where there is a completely different atmosphere that has nothing to do with CO2. So clearly, there is a sun factor, which is missing in their model," he reported.

Hans Borge, PhD in industrial mathematics and CEO of the Climate Realists from Norway, also took the floor at the conference.

"As we can see, thousands of years ago, about 2,000 years ago and about 3,000 years ago, we had warm periods, and everything indicates that these were periods of global warming. It was long before man-made CO2 emissions had any considerable volume. Therefore, we know that the natural variability can be large," the scientist reported.

According to him, CO2 is a gas that has very little effect on the climate.

Jan-Erik Solheim, Honorary Professor of the Institute for Theoretical Astrophysics of the University of Oslo, also provided his commentary for the international conference “Global Crisis. Time for the Truth." The scientist commented on the famous IPCC "hockey stick" graph. 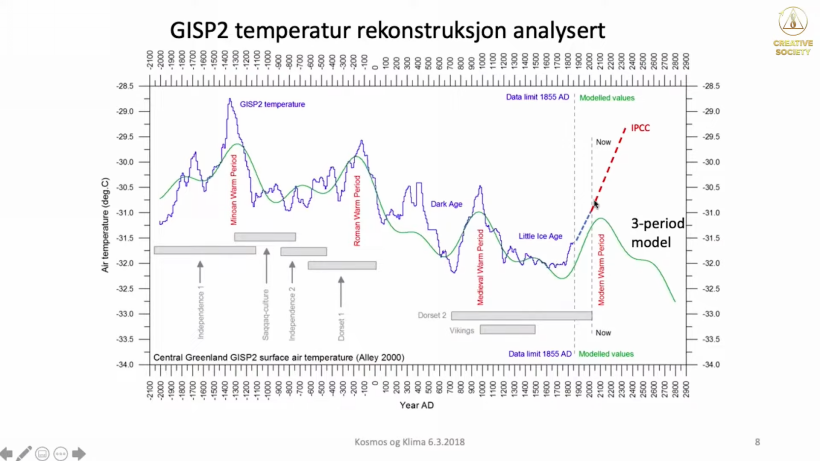 “In this graph here, we also saw what the IPCC does. It prolongs, more or less, this current going to infinite, that it becomes warmer and warmer because of the CO2 release or climate. And that's what we think is wrong. Our prediction is that it will soon start cooling, and we have to be prepared for that," Solheim said.

The professor said that he and some of his colleagues had conducted experiments to find out if CO2 can or cannot give off heat.

"We have built small greenhouses and tried to heat them by the sun outside or inside with artificial heating. We were able to show that carbon dioxide stops radiation, but we were not able to show any heating. That is a mystery. So, CO2 cannot heat, but what can heat is water, the water vapor," the scientist reported.

He showed the graph in which the blue curve is the ocean temperatures, and the red is the land temperature. 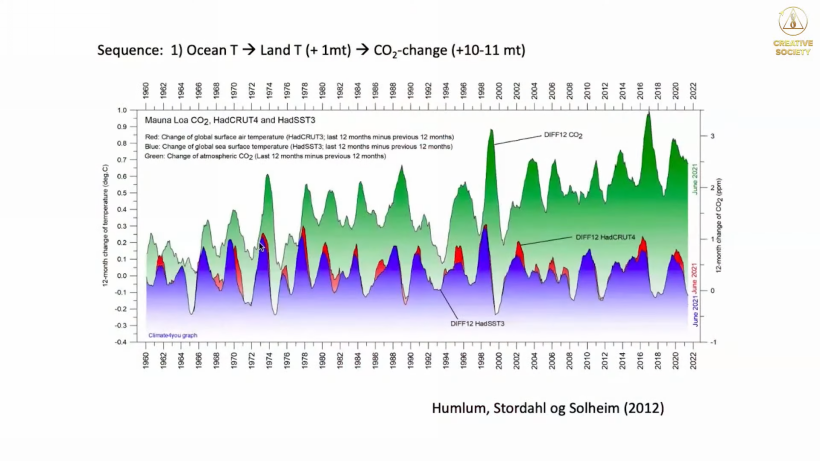 The scientist said that the red curve shows what anthropogenic CO2 or mankind has produced of carbon dioxide, which is about less than 3% of the increase from 1960. But nature produces the rest. So 97% of the increase comes from nature.

The truth is hidden, scientists' conclusions are not published

All the scientists who spoke at the conference noted how difficult it is to tell the truth, to express an opinion that does not correspond to the position of the IPCC. Mr. Harold Sterling Burnett, for example, stated that it's difficult to get published because journals don't want to hear it.

“That affects your tenure track position. And your colleagues are frowning at you. And you're not getting government grants because government doesn't give grants to study natural factors of climate change or to study things that prove humans aren't causing climate change. Because government has a motive: expanding its reach. I know researchers who've left the field because they feel like they can't get their honest assessment and get it either published or get tenure,” said the scientist.

For his part, Mr. Gregory Wrightstone added that if you like the scientific process, you're not getting much data out there.

Will Happer is our Chairman here, at the CO2 Coalition. He's got a paper that he and Dr. Wijngaarden have done on climate sensitivities. They're not able to get it in any prestigious journals. It's a landmark study," Mr. Wrightstone said.

In addition, the scientist said he was recently banned on Linkedin.

"I don't talk those things that are controversial, I post scientific facts — and they were being removed. And they got back and said, “We don't allow that kind of information on LinkedIn,” Mr. Wrightstone added.

"If you go to the media, you can express your opinion, but you will be strongly criticized, and then you won’t really have an opportunity to defend yourself. But most importantly, you won't get into the media with your first articles," he said.

Mr. Hans Borge noted that academic freedom is under pressure.

"What I have to say is that many people who join the ranks of climate realists do so when they retire, because until retirement they just don’t dare. Researchers who claim something different, don’t get grants, they don’t have their say in either published media or in edited journals," Hans Borge said.

At the conference, there was an appeal to climate scientists who defend the anthropogenic factor, to step over their pridefulness and talk about the real causes of climate change. At this point there is still a chance to set things right and show our humaneness. There is no need to fight with each other; humanity has only one enemy right now — the climate.

Participants of the conference emphasized that people must know the truth that in the coming decades all of humanity may be swept away by cataclysms unless the entire humanity undertakes joint efforts to overcome this enemy. The lies that are heard from all sources can lead all of us to the precipice if we do not work together to change the situation in which we find ourselves.