One Step to the Ideal Society

To Live in the Past or to Take a Step Forward to an Ideal Society?

Tatiana: Igor Mikhailovich, we receive a lot of questions from people who are interested in how people lived six or more thousand years ago before the time of the Sumerians. This is also the time of Hyperborea, just right after Atlantis, I mean, how people recovered and what this society was like. Because today there are many examples that society lived without wars, without armed conflicts, without exploitation of some people by others, without poverty. I mean, people indeed lived very peacefully and happily.

Igor Mikhailovich: Yes, at first, it was almost an ideal society, then it was what we now call the Creative Society. Of course, it's interesting, but I have a question for our friends since they are interested in it: a simple example, guys, what will the knowledge of how someone lived give you? How will it help you and how will it affect the lives of your children, your grandchildren, great-grandchildren, and so on? It won't. Why should we live for the past? Let's build the future. What is actually more important, really, what is more important: will we waste time, will we talk about how someone lived at one time, or will we do today what will give us life tomorrow? Why should we, let's say, discuss how they once lived in the Creative Society if we can build it now? What's better? Well, in my opinion... Actually, as you wish. If you want, we'll talk, no problem. But what will be the efficacy of our conversation? Will we satisfy people's curiosity? They'll forget about this in a day. It will not change their lives in any way. Well, it's true. How will it change your lives, my friends? It won't.

How Do We Live Now and What Can We Change?

Igor Mikhailovich: But we can change lives, and we can make the world a better place. Isn't that right? Let's go back to "The Truth and Chaff" video because we have revealed the basic laws there: the formation of an image, our attention, the power of our attention, and its investment — where we invest it is what we implement. Yes, we are now divided. Well, this is how the system works, that we should all live, as they say, by our ideas, by our images, and without unity. That’s why, as you have noticed, we have already lived like animals for 6,000 years from the time of the Sumerians to the present day. But we can change everything, and we can even build an ideal society, not to mention a creative one. Is that right? Let's just talk about this. Well, this is more useful. 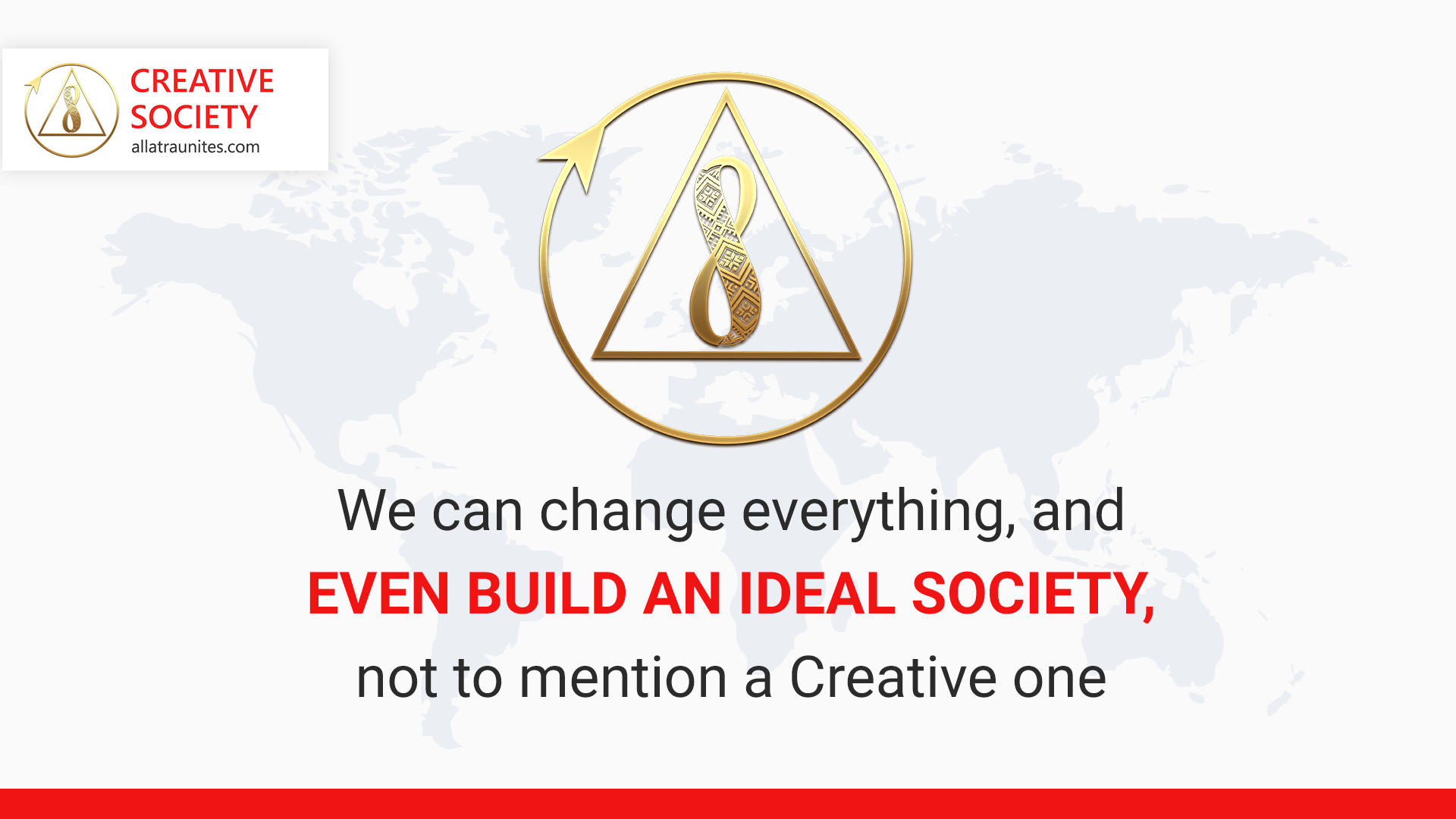 Tatiana: Okay, Igor Mikhailovich. Frankly speaking, I was actually preparing for the programme in a historical context, about how it was, and how people lived back then, therefore... But, what you are saying is really correct. I now understand that the vector of our conversation is already changing in a slightly different direction, towards the future, because I agree with you (Igor Mikhailovich: What is more valuable?), that indeed, there's no use in this past (Igor Mikhailovich: No use at all).

Igor Mikhailovich: The past is already gone, and now we will be talking about something that doesn't exist. Or are we going to talk about what might be? It depends on us whether it will happen or not. What is better?

Tatiana: Okay. Well, then I have the 8 Foundations of the Creative Society.

Igor Mikhailovich: There you go.

What Is a Creative Society and in How Many Years Can We Build It?

Tatiana: Igor Mikhailovich, before we proceed to the 8 Foundations, I would like to find out the following: What is actually the Creative Society? How do you envision it? I mean, who is this society focused on?

Igor Mikhailovich: On a person. The Creative Society, in my opinion... Of course, there are as many opinions as there are people, but again, the Creative Society is simple, it's very comfortable and convenient for a person. Why? Because it is focused on a person's benefits and freedoms. And that's the entire meaning of the Creative Society... There are no lies there, no deception, and most importantly, there is no power, because a person has all the power. There's no superstructure over him — that's the point. Just look at the number of wars, revolutions, all kinds of human revolts that we have. Right? And we always look for what? Why do we take sides against each other? 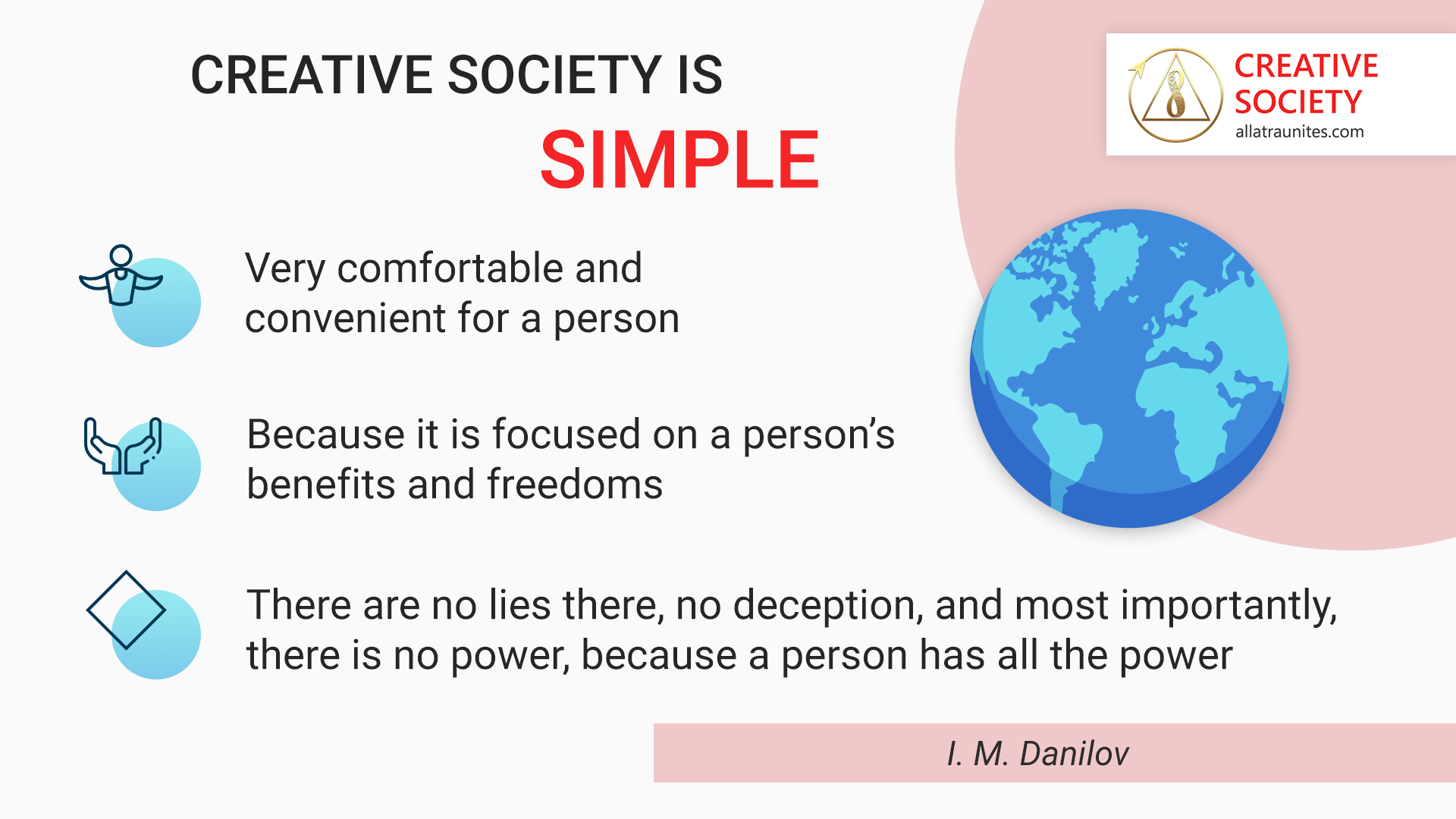 Tatiana: In search of happiness, in search of an ideal society and freedom.

Igor Mikhailovich: Freedom and everything else. Yet, what are we building? The same. They say: you can't kill the dragon (Tatiana: By the same methods). When you defeat the dragon, you become the dragon yourself. Why? A simple question. Because the consumerist format itself dictates this scenario. Right? For example, people make a revolution, they strive for the best and a nation rises. The same tyrants come to power who again manipulate us in just the same way, and we get nothing. Why? Because that's the law of the consumerist order. It will remain exactly as it was set up to be, because we remain divided, we have our own interests, and most importantly — we live by the law of beasts. Right? I mean, we treat each other just like beasts. Although we have laws set out, the UN and other organizations create them, and they declare how we should live but all these declarations do not work. Why? Because the consumerist format dominates, in other words, the inhumane format of a relationship of one person towards another.

Can this be changed? Easily, my friends. It all depends on us. And again what do we return to? To the integrity of our attention, where all of us together invest it. If we want to live well, if we want to live worthy of a human being, then we should invest our attention precisely in this, that is, we should invest our time and efforts in building the future for ourselves and, let's say, for our children and descendants. 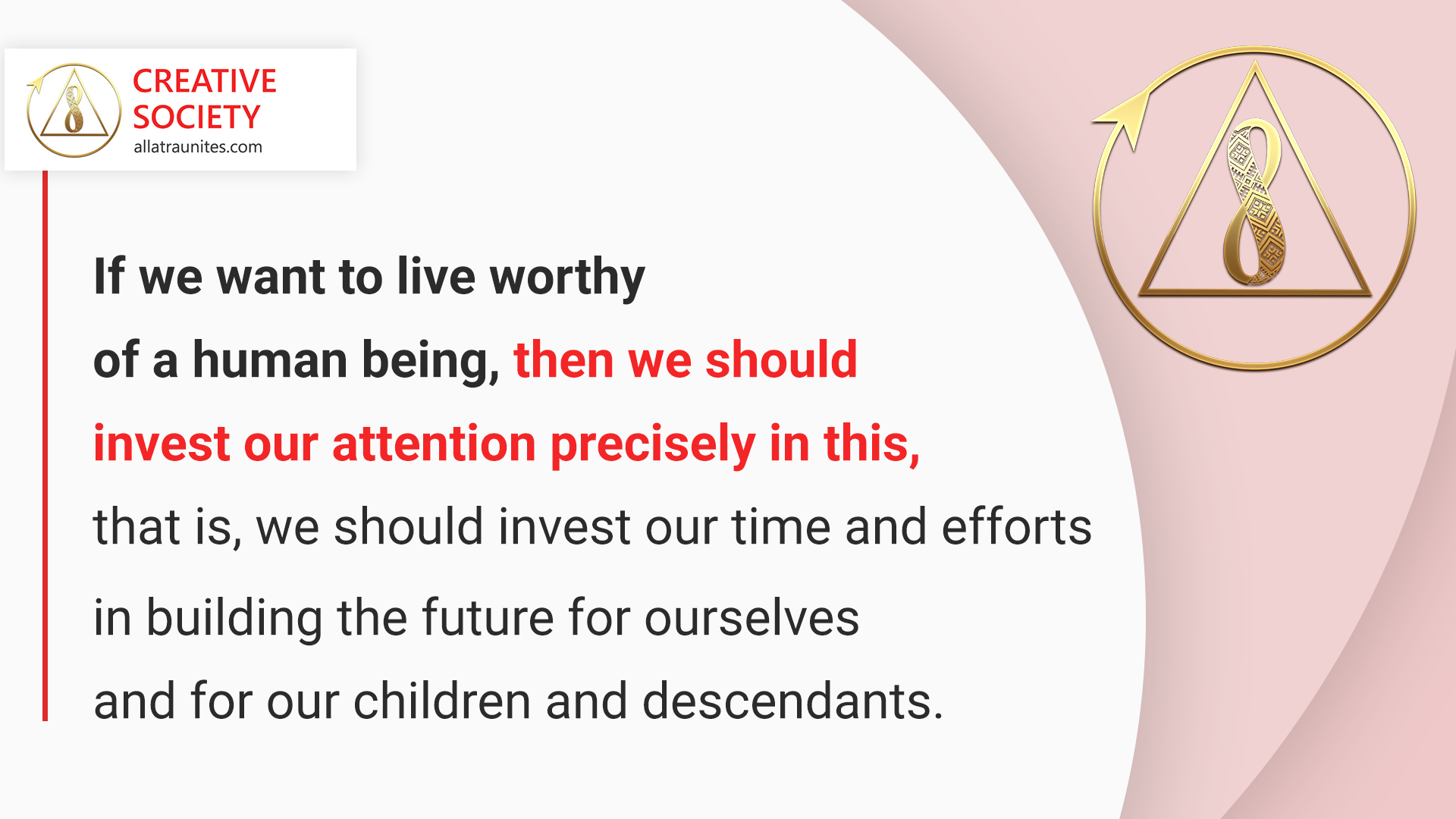 If we approach this from the perspective of the present day, then it is actually very easy to build the Creative Society. I’ll put it this way: if we really want this, and everyone who has understood the entire meaning and essence of the Creative Society that we are going to talk about now, then it’s realistic to build it within ten years. Ten years (Tatiana: Great) — and we will live in this Creative Society. But again, it depends on people, on their desires and aspirations. If we do nothing and set our hopes on someone else, that someone will do this — it won’t be built, because the Creative Society is precisely the task of all people. It’s not just a task of, for example, some idea-driven fellows who are supposed to do something for someone, but it’s a task of each and every one of us, it is our task. Right?

Igor Mikhailovich: Exactly, that's the point. Then, all together we will do it.

Igor Mikhailovich: There will still be sociopaths, I mean, enemies of humanity, who will stand in the way of the Creative Society. Why? First of all, it will be a collapse of their plans for building their own empire, for their reign and of people serving them as slaves. Well, there are such sick people. They are even nonhumans, you can't call them people. If a person stands against humankind to please his personal ambitions and desires, he loses the status of a human. He's not a Human anymore, he's a beast. He is already as dangerous as, pardon me, a sick animal.

For example, a mad dog: is it useful or dangerous for humanity? Can it be released where there are people? (Tatiana: Of course not) For example, people are relaxing in the park, and we release a sick unhealthy animal, such as a doberman or a bull terrier infected with rabies, in the stage of aggression, and we release it. Is that a good deed or a bad one?

Tatiana: A bad one, of course.

Igor Mikhailovich: What should be done?

Tatiana: Naturally, it should be isolated, of course.

Igor Mikhailovich: So that it doesn't harm people. Is that right? It is. So, anyone who opposes the Creative Society, that is, directly opposes a human being, is he any different from this sick animal? Just be honest. That’s worth thinking about. Right? After all, no normal sane person would ever oppose the Creative Society. Why? Let us explain.

What is the Creative Society? Like you said, it existed as long as 6,000 years ago. Well, let's say, it ceased to exist 6,000 years ago. We won't go back to that, we've already talked about it: how it was, what happened, and why an ideal society transformed into a creative one. Such a degradation process occurred. And then, the Creative Society turned into such a consumerist format where a man is a wolf to a man. We've already told you about that. 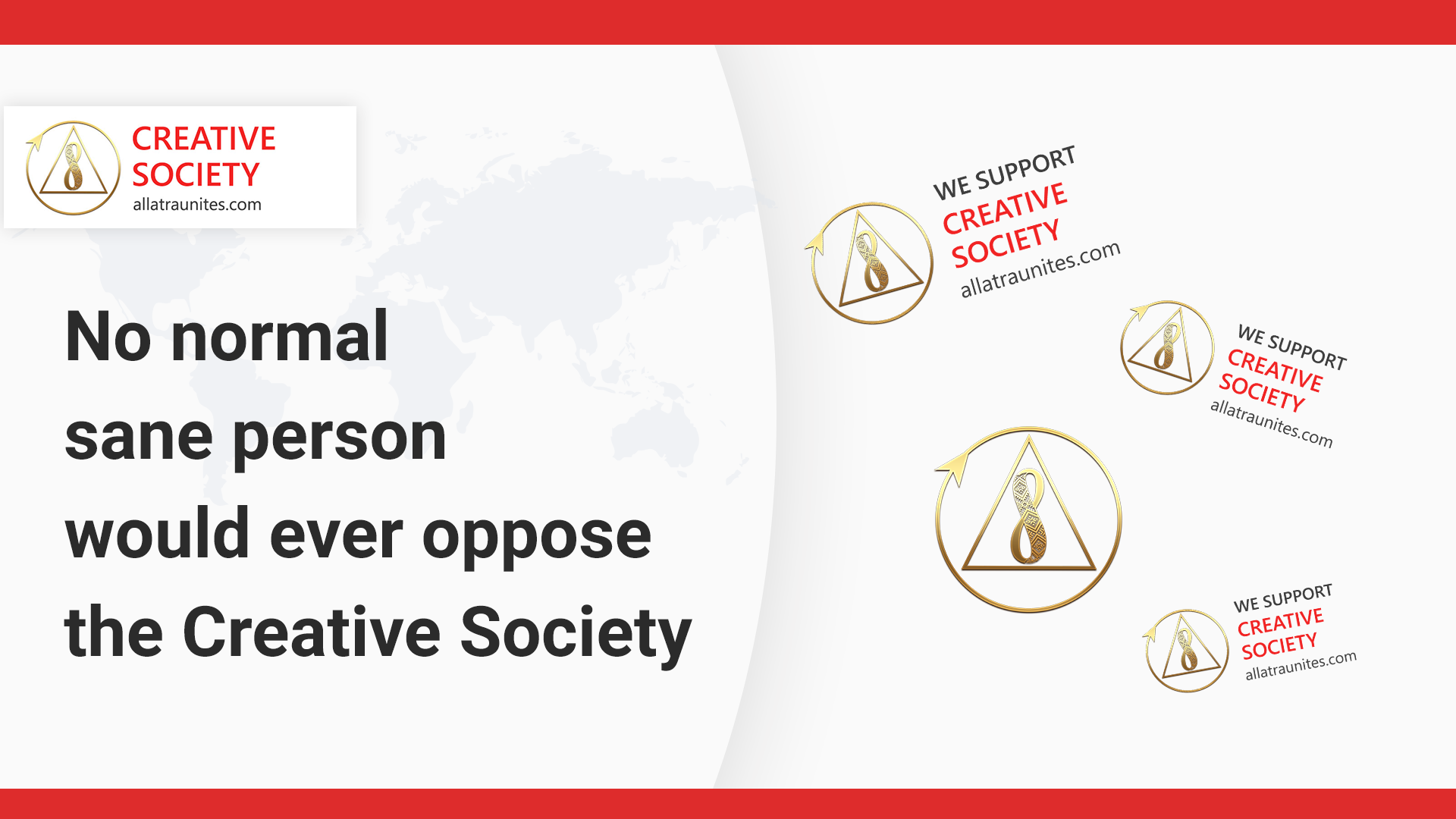 What Do All People Want?

Igor Mikhailovich: Let's talk about what the Creative Society actually is today. It is what all people want. We've been conducting a lot of surveys  for several years all over the world. And all people openly say the same thing: that they want to live in peace, they want to live in love, mutual respect, and freedom. They don't want any superstructures that control them. What do we mean by these superstructures? It's when a small group of people, let's say, usurps all the rights and benefits of the entire humanity, or of those people who elected them. So, this unwillingness to live in a consumerist format is manifested in their desire to live in freedom, as one family.

What is implied here: what does freedom mean? Because freedom is... Say, let's look at history, as of today: everyone is fighting for freedom, for some rights and freedoms. What rights and freedoms do people fight for, in fact? Precisely for the Creative Society: where everyone is equal and free, where there is no crime. 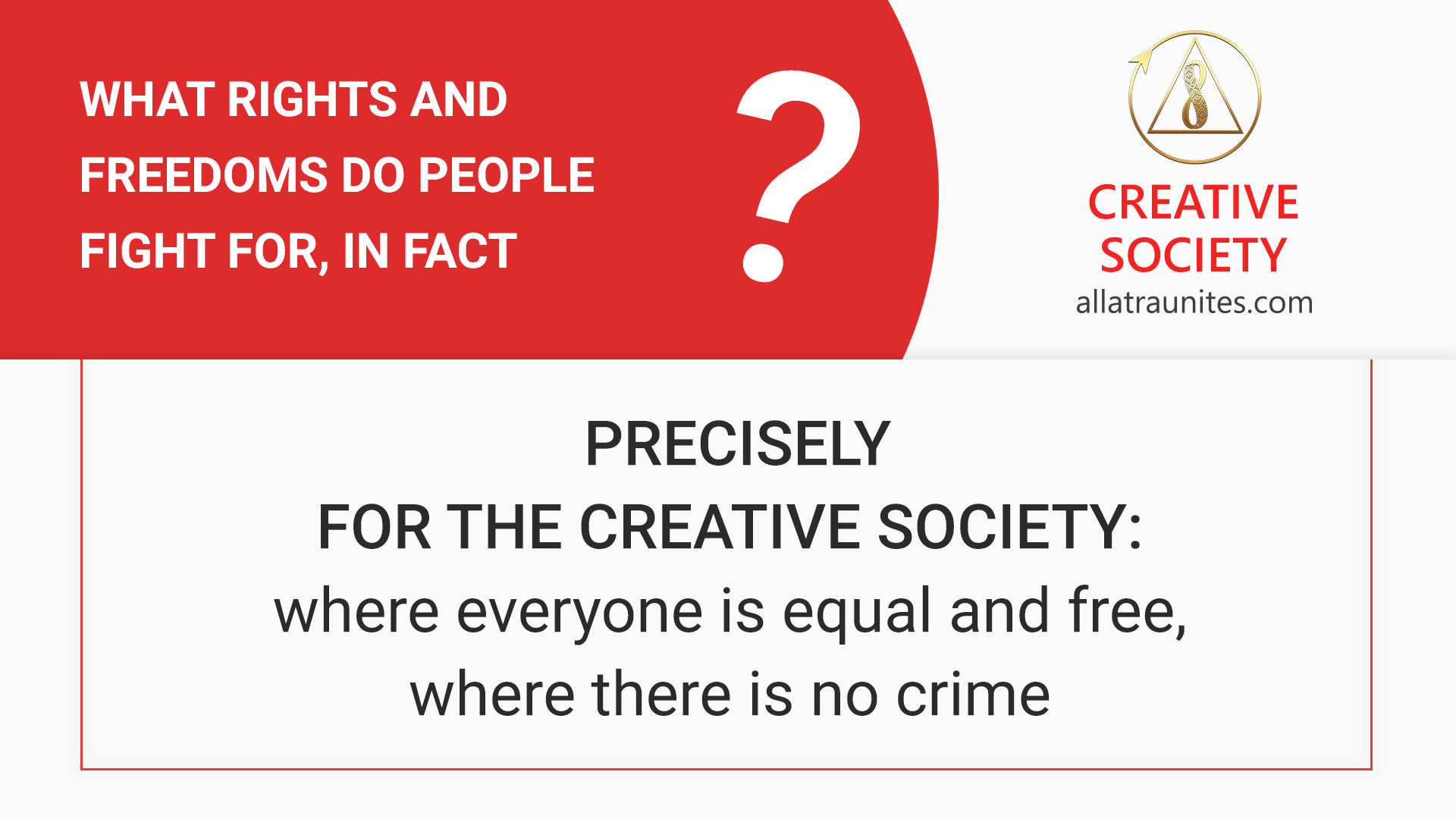