It Is Within Our Power to Build a Safe World

Building a safe world is realistic! How to eliminate the causes of crime and get rid of this phenomenon? What should a person be provided with by birthright? What could be the length of workweek and wages in the Creative Society?


What Is the Main Reason for Crime and How to Eliminate It?

Igor Mikhailovich: Again, what does it mean, there's no crime? A good question. Right? There's no crime where there are no conditions for it to exist. And the very first condition for the crime itself is, excuse me, a human need. It pushes a human to take the wrong path. Right? While when a human lives comfortably, when he has everything, when social security is guaranteed to him, then he faces a choice: to commit a crime or not to commit it? He has everything, he's fine. Why would he commit a crime? To lose those benefits that he has? And one of the Foundations, let's put it this way, or what the Creative Society provides, is exactly the satisfaction of all human needs. Right? I mean, it’s housing, excuse me, it’s social security provided for a person, it is high-quality medicine, it’s education, the right to work, and everything in the world, if he wants that. 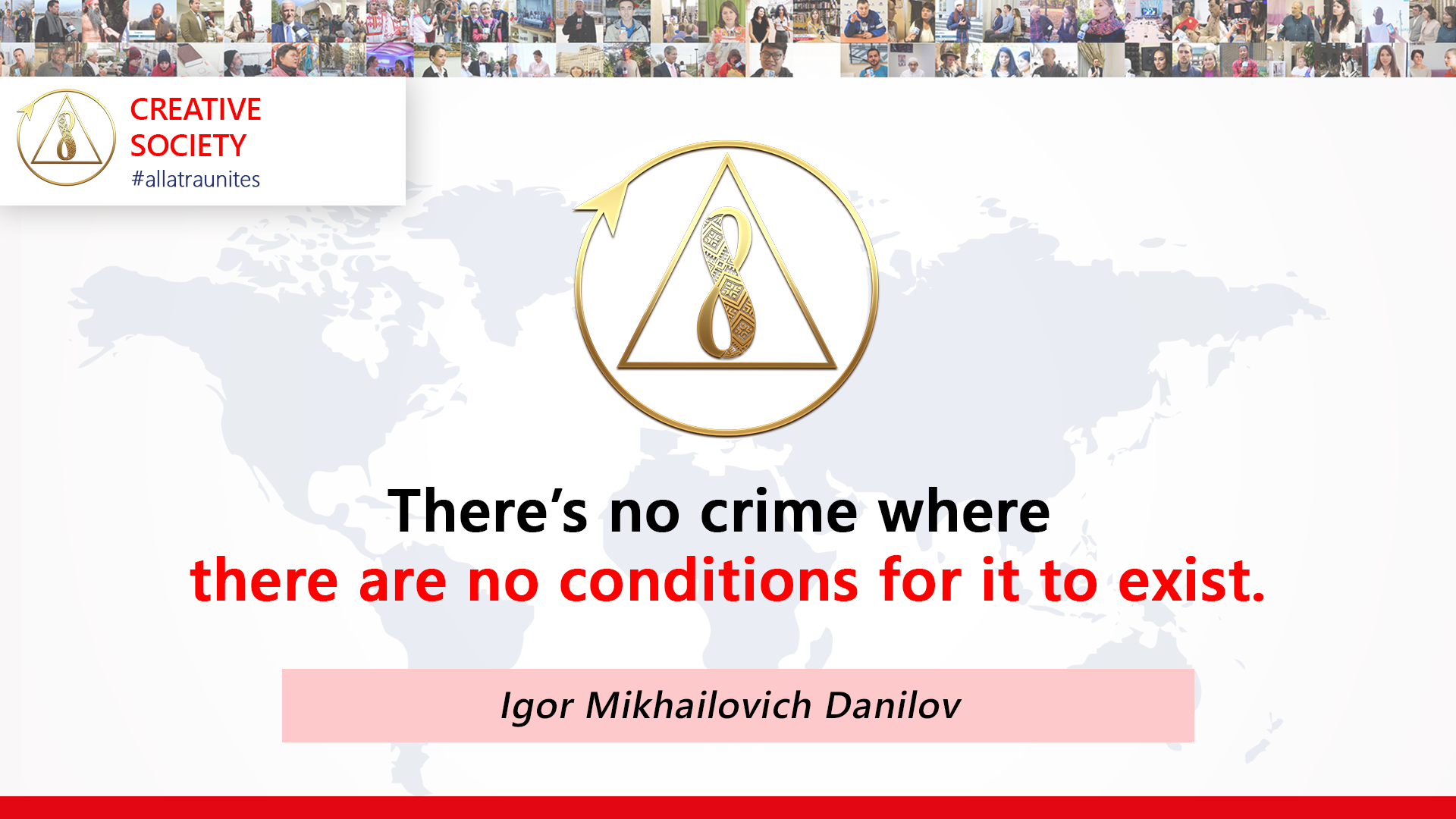 Igor Mikhailovich: But here's also a small point, and now we have  touched upon the right to work. What if a person doesn't want to work? He still has to be provided for in the Creative Society. … let's say, he should have an apartment. He must be provided for so that he is fed, has shoes and clothes. Medicine must be guaranteed to him, and everything in the world. There shouldn’t be such a thing that he owes anybody anything, or, excuse me, they'll cut power for non-payment, or will create conditions when he has to commit a crime to survive.

A Workweek Is Only 16 Hours

Igor Mikhailovich: Many will say: people will stop working. Right? No, my friends, they will not. The very building of the Creative Society takes away the unnecessary. Why is it said there: four hours a day, four days a week is enough for a person to stay at work so that they can live a beautiful life. I mean, he will live a normal life by the right of birth. Society must already provide everything for him, let's say. But if he wants to live much better and to live a beautiful life, he should go and work.

Igor Mikhailovich: Again, it’s clear that for some work people get paid more, for another one - less. Well, it's the right of a person, he chooses for himself. Nobody eliminates private business either. Right? Within moderate, reasonable limits, let's put it this way. Well, I guess we'll also talk about this. But just for understanding, if a person wants to live a better life, he can literally do it by, say, spending four hours a day, four times a week going to work, creating something, selling something, say, building something - it's more than enough for a person to live a wonderful life. I mean, the salary should be high.

How to Ensure High Wages for All People?

Igor Mikhailovich: They'll say, but where will it come from? Guys, just don't pay those who don't do anything. You can't even imagine how many people are getting a free ride right now. You know, there's an expression: one person digs while seven people sit on his shovel watching him. Well, it is really so (Tatiana: Alas). And whatever we take, starting with education, with science, almost any profession - well, everywhere and all around, there are a lot of people who just get paid without contributing anything useful. Well, that's true. And again, the distribution of funds or wages - well, it’s absolutely unfair today.

Let's take a simple example. There's a business, and there's a business owner. Obviously, he has set it up and the like, he provides people with a salary, an opportunity to earn money. But in percentage terms, how much does the owner get and how much is paid to the person? Well, these are simple examples. Right?

Igor Mikhailovich: In addition, the prime cost and many other things...well, economists will figure this out, let's not get into the economics now. But if everything is actually arranged honestly and in the right way, a huge amount of money is freed up. And it appears that a person doesn't need to work eight or even more hours in order to earn much more than he earns now. That's true. It all was calculated, again, it didn't just appear out of nowhere. Well, a similar society has existed..

Tatiana: Yes. It was a safe society as well.

Safe World — the Human Being Deserves It

Igor Mikhailovich: Again, now you have mentioned safety. Tell me, isn't it wonderful when you drive up to a store, get out of the car, leave the keys inside the car and your purse with the money is left in the car, you took just enough to go in and buy a bun, you go in, buy a bun, you come back and everything stands and lies in their places, because no one will even think of taking something that doesn't belong to them? Isn't it wonderful, let's say, to sleep with the door unlocked, right? Let's say, neither the apartment nor the house is locked, you don't need a lot of alarms, nobody will come to you and steal anything from you or do any harm. Is it bad to have such a free and safe world? Or is a human being unworthy of that kind of a world? I think he is worthy (Tatiana: He is worthy). Can't we do that? Yes, we can.

Igor Mikhailovich: And again, a lot of people will say, "What about criminals...  after all, there are sick people." It is clear that there should be a service that monitors, let’s say, the purity of morals and safety, but it should be a single service that is responsible for human safety entirely. Just like we have the Ministry of Emergency Situations today. Right? One service should be dealing with any kinds of threats and any dangers, but it should be one service all over the world. Modern technical means, among other things, enable us to make the world absolutely safe, because crime will not remain unpunished. Excuse me, if you know in advance that if you commit a crime, you’ll be punished, well, somehow you don't want to commit it anymore, especially if you live well and you are not in need. Right? I mean, everything is very simple. 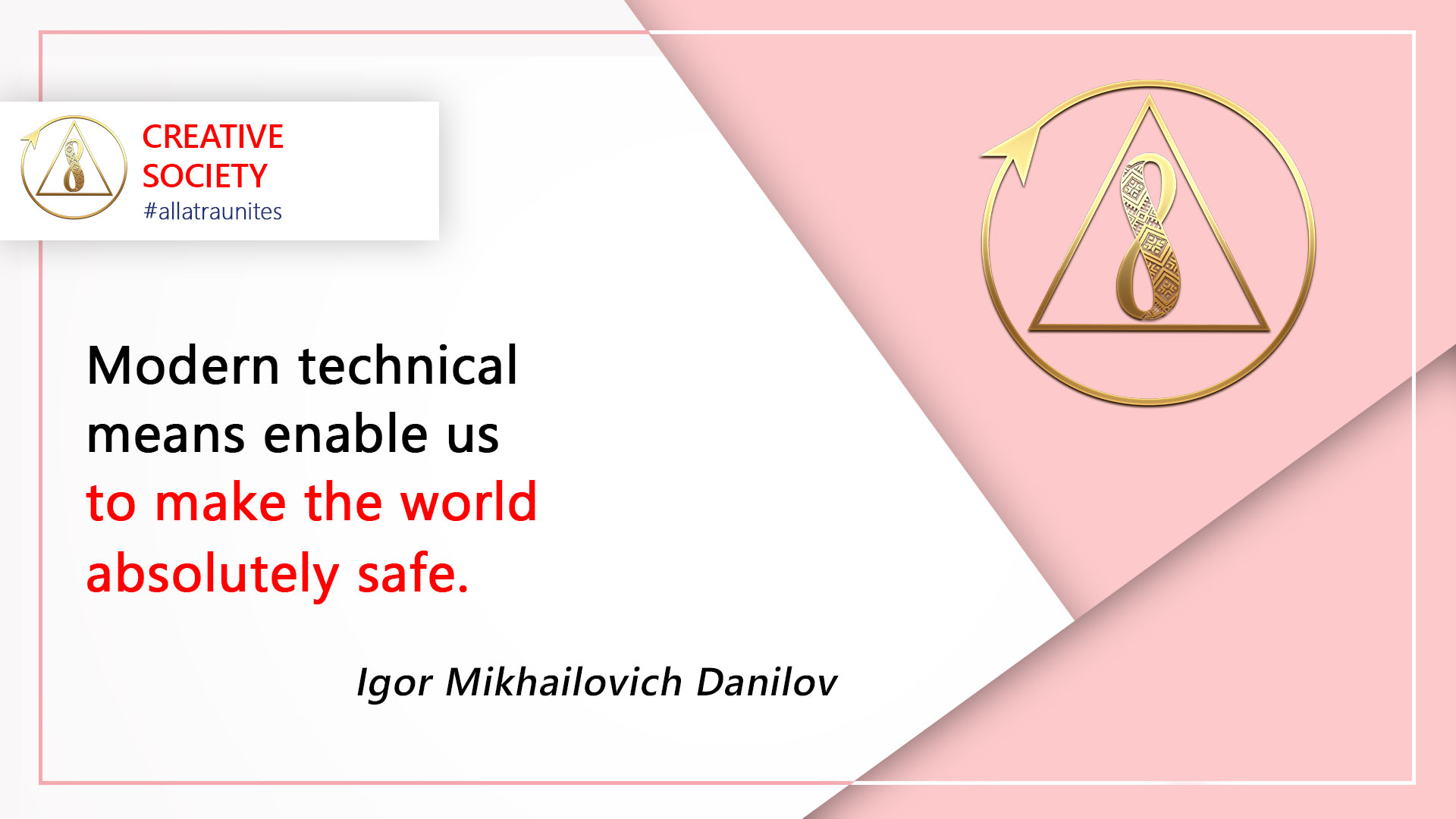 Igor Mikhailovich: In addition, there won't be those who are interested in supporting and creating crime. And here’s a very interesting point. Few people have thought about it, but, let's say, the system itself is built in such a way that... I'll put it simply: if there are police, there must be crime. The police were created to fight crime. Let's say, if there's a bee garden and there is a beekeeper, then bees must make honey. Right? Similarly, crime itself generates a whole system of fighting against it and controlling it; millions and millions of people around the world are engaged in this system, yet, crime has existed and will continue to exist. Why? Because the conditions are being created for it to exist. If we remove the crime, where will these millions of people go? Well, everyone perfectly understands that. But, can we overcome crime? Easily.

Igor Mikhailovich: It's easy. After all, we are all human. And if we consider those very criminals, in fact, they are... Well, I am not talking about those people who are indeed sick, who can't really be called humans — they are beasts. But for the most part, those who commit a crime, they are forced to commit it, however, these people are risk-takers. Right? They risk their lives and they risk their health. Yes, they go against a human being, they go, let's say, and commit illegal acts, but at the same time they are predisposed to take the risk — thrill seekers, so to speak.

Igor Mikhailovich: Exactly. So, won’t such people find a job in the Creative Society that is connected with the risk, where they can show themselves and earn much more than they steal? And they will live a much better and safer life than they do now, when they steal and commit crimes. But most importantly, if today a criminal lives and they spit on his back and that's, well... a criminal is a criminal. Right? But on the other hand, if this person works for the benefit of humanity in the Creative Society, then, excuse me, everyone will thank him and praise him. Isn't that nice?

Tatiana: Yes, he will be treated with great respect.

Igor Mikhailovich: Simply, just tell me, my friends, what is more pleasant for you: when they spit on your back or when they give you flowers? Here is a simple suggestion. Isn't that so? And at the same time you earn more and earn honestly, you sleep well, and your relatives and friends look at you with pride. Right? (Tatiana: Great) Well, isn't it better? Everything is possible. Everything can be done and everything can be changed, and it's all in people's hands if there is a will.

Tatiana: It's an excellent alternative, exactly. 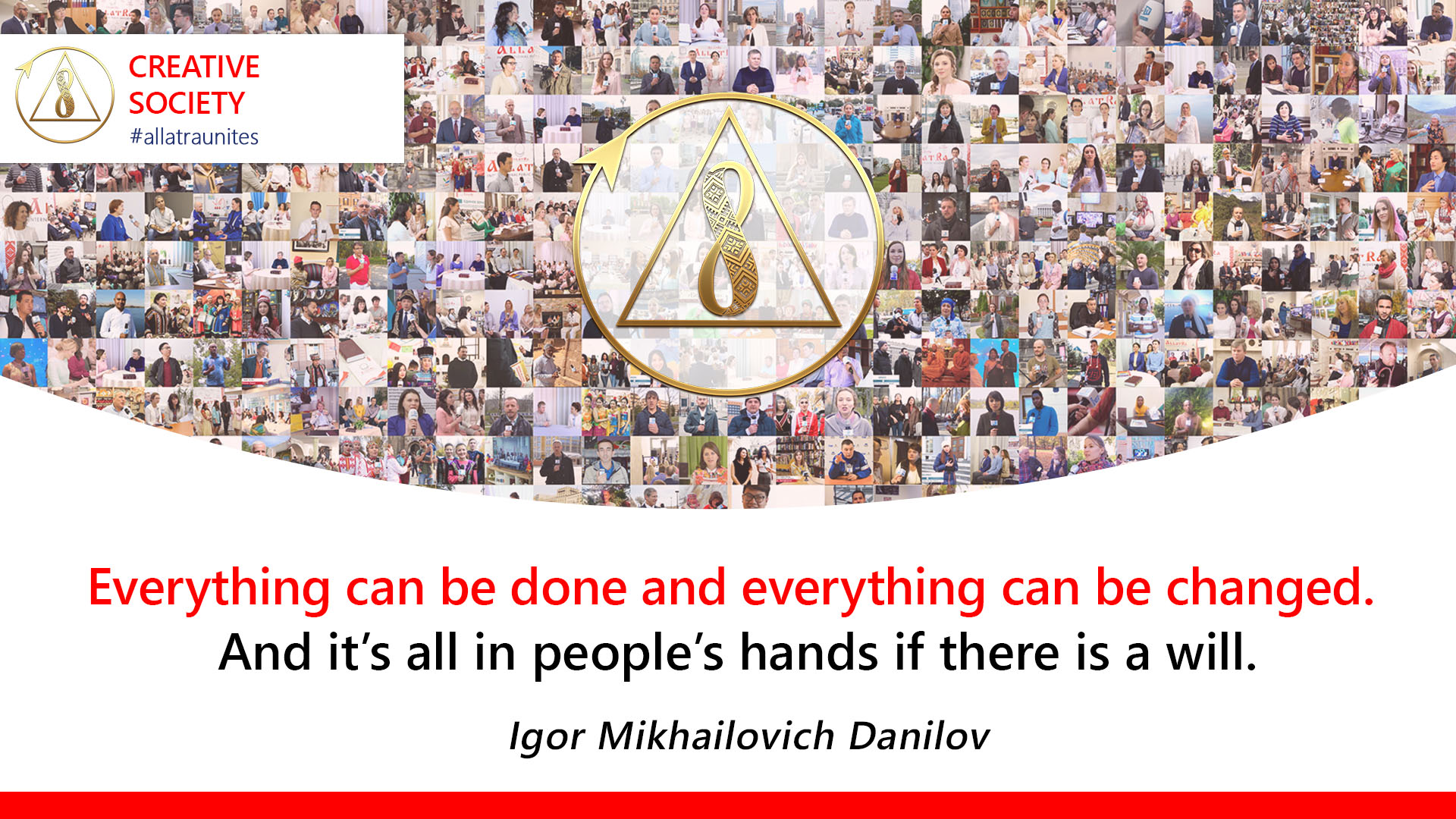